(A Cartograf scenario by M.E. Frenette ad A. Farina, of LBPSB) 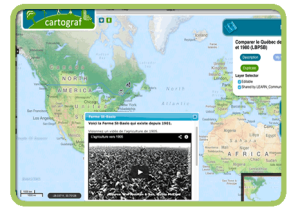 In this scenario students will compare Quebec in 1905 and 1980

Using the tools in Cartograf, they will:
-trace the limits of the Quebec territory
-indicate population in typical settlements
-consider Quebec agriculture
-compare the use of railways and boats
-trace routes between Ireland in Montreal (1905)
and between Haiti in Montreal (1980)
and describe the use of the boats to travel