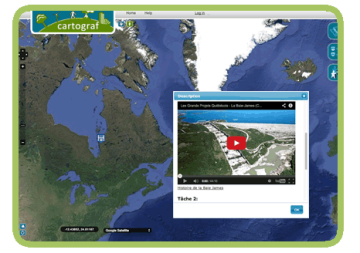 Electricity is one resource of many, but maybe the most important resource of Quebec. Nationalizing that resource (making it publicly owned) was a milestone in the economic and political life of the province.

This scenario consists of three task sections:
1) Establish Facts by viewing some videos on the origins, history and issues of the James Bay; then identify the political and economic advantages and disadvantages involved.
2) Situate in space & connect facts by identifying and considering some communities that were affected by Quebec's hydroelectric network.
3) Situate in space & connect facts by identifying another dam site in the province of Quebec, and considering its advantages and disadvantages, then compare it to a sample dam location.