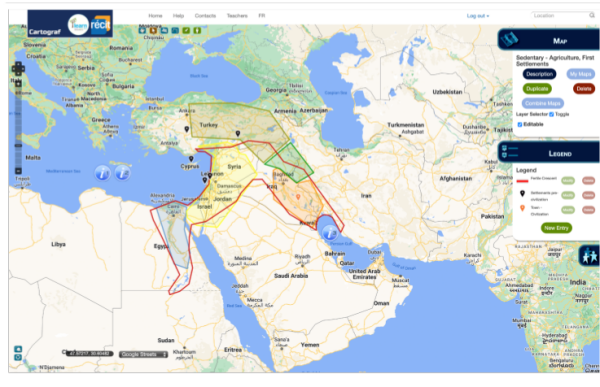 THIS MAP AND INSTRUCTIONS CAN BE OPENED AND DUPLICATED HERE

Why did humans become sedentary?

Note that this Cartograf mapping scenario could be complimentary to, or could benefit from, the learning scenario and game strategy entitled, What characterizes a sedentary society?


1 - Agricultural Revolution: For the better?

Open the M. Univers social icon to view an overview of the situation: nomads were becoming sedentary!

Open information icon 1 to read about the Neolithic Age.
(Also attached there is a longer video overview by Crash Course that teachers may want to review first!)

Open information icon 2 to read about when these changes occurred, and about what preceded them.

Open the red line that represents the Fertile Crescent by clicking on it to reveal the information in its description.

Task: Begin to Characterize the Neolithic Age
Share with your classmates your explanation of what the Neolithic age was, and whether agriculture was important. Were people better off?!

Open the red line that represents the Fertile Crescent by clicking on it to reveal the information in its description.

Open the various regions represented by polygons (coloured areas) on the map.

Observe images, read overview texts, follow source inks to contextual readings.
Learn about why people settled in one place, what they got from the land, what/if they had agriculture and produced surplus.
Learn about what they didn't produce (i.e for trade and other contacts exercise to follow).

3 - Trading or contacts between areas

(Situate in Space and Explain Consequences)

Students can Duplicate the demo map.

The Point of Interest markers indicate settlements or possibly larger towns, during the first instances of sedentary life and the beginnings of Neolithic era and the time of agriculture. (These may be being studied for other reasons in other classes already.) Read a few to get an idea of the different reasons for settlements there, and for how self-sufficient they were.

_Task: Map out and explain possible trade routes.__
Could these people have been in contact with each other in these early times? Why? What might they have traded? What might have been the consequences of that trade?

If you feel it is possible or that the readings point to evidence of trade or even just contact:
Add lines and possibly additional points to explain where, what and why things were traded!

If you feel that trade was no necessary or unlikely, explain by putting other icons beside a few locations, to allow you comment on those locations and state your case!


ACCESS THE MAIN MAP WHICH YOU CAN DUPLICATE AND WORK FROM