The Emergence of a Civilization 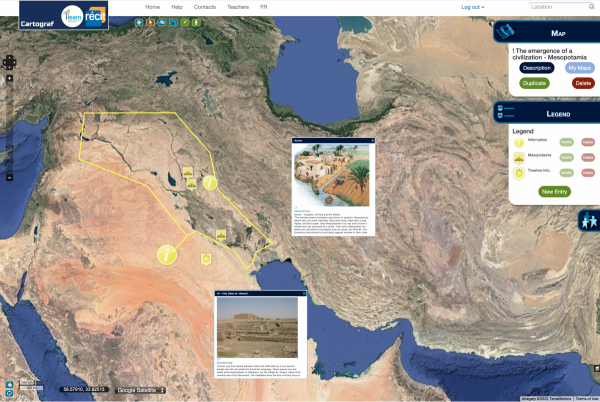 THIS MAP AND INSTRUCTIONS CAN BE OPENED AND DUPLICATED HERE

Review your knowledge of the the Neolithic period and the Agricultural revolution, which allowed people to live in one place. (Scan parts of the mapping scenario entitled Sedentarization - Agriculture, First Settlements & Trade or review the activity called What characterizes a sedentary society?)

Use the information icons to learn about the civilizations that emerged in the Mesopotamian area.

View the timeline icon to situate this civilization, some of the city states, and other civilizations you might know about in time. Think about how long a civilization takes to develop!

Read about the different city states that grew initially on their own, or then were conquered or controlled later as part of different empires.


Use a list of the top most important things in Mesopotamia, and divide them up amongst the class. (i.e you choose a civilization or your teacher assigns you one!)

For your most important thing, research further, finding at least three other sources for more information, or to learn about a fact you found particularly interesting.

Create a new map of this area, entitling that map something like "Mesopotamia Important Point - My Name", then place one point on the map in which you write a summary of why you feel that fact is important for the region and historically in general. Place that summary on the map and at an exact location you feel is appropriate, with an icon you feel is appropriate as well. In your summary somewhere, also explain why you put it there.

Here’s an example of a good list to use or as a starter:
Top 15 Most Important Events in Ancient Mesopotamia! In case that site goes down here is a print version of those 15 facts/events.


Thanks to archaeology, we can agree on the existence of eight civilisation centres that developed independently of each other:

Task: After reviewing the information available on the Mesopotamian civilization(s), choose one of the other civilizations and create similar points for that civilization, that is
Source: Civilization - M. Univers social


MAP AND INSTRUCTIONS CAN BE OPENED AND DUPLICATED HERE